Parking is on the street, but since it’s not on a cross-street, it isn’t too busy and there’s an accessible (disabled/wheelchair parking permit) parking spot as well. Walking into the park, you’re greeted by a nice little mosaic.

There are also little mosaics speckled throughout the paths in the park, some by kids, some by more experienced artists.  They’re cute; check them out. 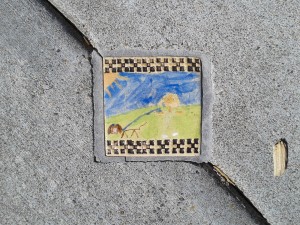 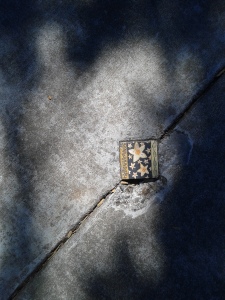 Now to the play structures: 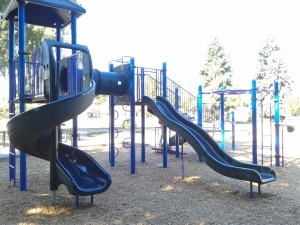 They have a mix of the same-old stuff and some unique items.  I haven’t seen this kind of bouncer in many parks, and I haven’t seen any other circular monkey bars like these. 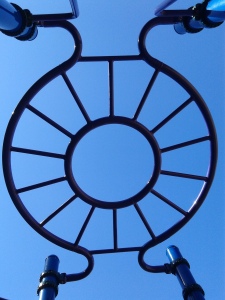 We like the shiny tunnel and baby likes crawling up the safely enclosed stairs. 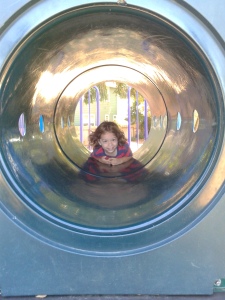 Bouncer/see-saw and 2×1 swings, or 2 kid and 1 baby swing set-up. You can also see lots of benches, tables, and bike racks hiding in these pictures. 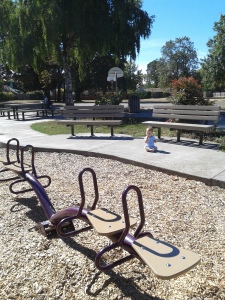 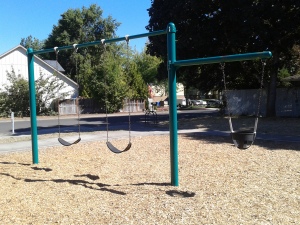 The park was pretty shady, but when we were there the sun was still partly behind a very tall tree.  However, even when the sun passed the tree, there was still a fair amount of shade.

Trashes and water, but no bathrooms here.  There were a lot of people passing through on bikes and walking dogs, with some people stopping to play.  I like a park that isn’t deserted.

Moving further along, there’s a field with trees and a path and a basketball court.  We didn’t go down the path this time (recuperating ankle), but it appears to lead to a street on the other side called Margaret St. 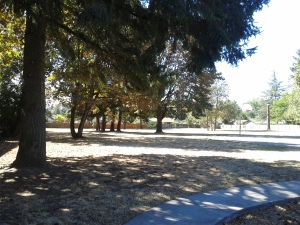 I liked this park; with its nice, central location and a fair amount of trees.  I’ll definitely visit it again.

When I do a post for any park, I always go to the main government page.  Usually there’s just one picture that doesn’t show too much about the park (why I’m doing this blog in the first place).  With Brewer Park, the picture looks nothing like the way the park looks now.  It’s obviously a picture before the park was renovated.  I have to say, I’m sad to see the changes.  The merry-go-round is gone and the structure used to be made of wood and metal.  I’ll miss those old play structures from my childhood.  I wonder if we are missing out on something by getting rid of those classic play structures, but I guess old things need to be replaced eventually.

As you can see, the sign is quite a bit away from the actual play structure and picnic area (you can hardly see it way in the distance).  I prefer to go down Arrowhead a ways and park on Merlot, right next to the play structure.  But, if you like a little walk or run, there are some nice paths that lead next to the trees and through the field. 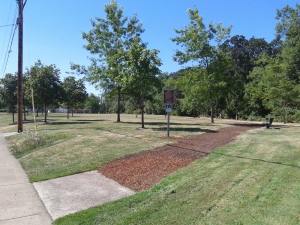 Don’t worry, there are benches every so often so you can rest.

There’s a bouncy see-saw with 4 seats which tends to cut down on the arguments. And the 2 kid, 2 baby swing structure.

Next to the play structure is a nice picnic area with trashes, benches, and a water fountain.  There are also different wildflowers that bloom throughout the seasons.  It would be a very lovely area for a birthday or baby shower.  No bathrooms here, though. 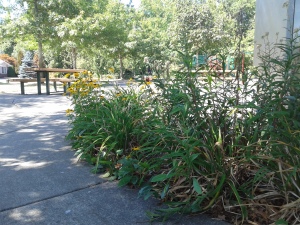 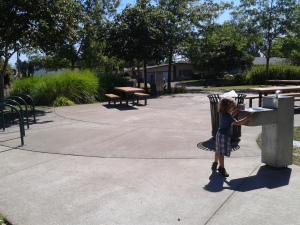 There’s also a special little path to walk on.  It follows “flat creek” and leads to some other neighborhoods.  It actually ends back on Arrowhead near Spearmint St.  It’s easy to go down Arrowhead St. back to the park or back the way you came.

A local neighbor told us that the creek comes back in the winter and is frequented by friendly ducks.  Just watch out for poison oak!

Arrowhead is a bit hot in the summer, but there’s a little shade to squeeze a blanket under. Someday those trees will be bigger and this park will come into its own. 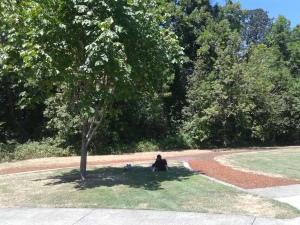